Every day more Fender Deluxe 5E3 circuits come to life for the first time than perhaps any other design. A simple internet search of "Fender Tweed Deluxe kit" turns up enough links to force even Fender itself to consider entering the hot DIY market.

With a single pair of 6V6 power tubes in push-pull with cathode bias, the Deluxe hits the sweet spot for a power level that doesn't swamp the mix.

"[I use] the same amps I've used for a long time with the Heartbreakers, Fleetwood Mac and Dirty Knobs. I like little amps, so I use a Fender Princeton and a tweed Deluxe. I've got backups in case they blow up, but they're pretty dependable. A while ago, I did some club gigs with Bassmans and AC30s, but they were too loud and drowned out the vocals. So the combination of the Princeton and tweed Deluxe is just right." 1 -Mike Campbell

The first stage has two channels that share a fully-bypassed 820Ω cathode resistor and 25μF cathode bypass capacitor. The equivalent values for one triode are 1.64kΩ and 12.5μF, respectively.

The #1 input jack connects to a classic gamma network comprised of a 1MΩ grid leak resistor and a 34kΩ effective grid-stopper resistance comprised of two 68kΩ resistors in parallel. Across the network there is unity (0dB) midrange gain and very little treble attenuation due to Miller capacitance.2 The purpose of the 34kΩ grid-stopper resistance is to attenuate only radio frequencies.

The 230V plate supply voltage is estimated based on tube data sheets. According to the 12AY7 calculator, the DC grid bias is about -1.9V.

An arbitrarily small AC load of 123kΩ is used in the calculator to rotate the AC load line clockwise to provide a better marker for the DC operating point. The actual AC load varies substantially with the settings of the volume and tone controls. Moreover, frequency has a big impact. At 82 Hz, the 0.005μF tone control capacitor has a relatively large reactance of 379kΩ. For the 500pF capacitor it is even greater: 3.79MΩ. At 10kHz, the reactances decrease to only 318Ω and 3.18kΩ, which are quite low compared to the resistances of the potentiometers. The AC load therefore varies greatly with knob position and frequency. Based on SPICE simulation,3 here is the frequency response in dB versus frequency in hertz with the volume control set to 10-percent resistance.

The volume control for the other channel is set to minimum.

The second stage is a classic voltage amplifier with a fully bypassed cathode resistor.

According to the 12AX7 calculator, the DC grid bias is about -1.2V.

The AC load is again set to an arbitrarily low value of 123kΩ to better mark the DC operating point. The input impedance of the next stage is greater than 1MΩ, representing a very light load, so the actual AC load line is rotated only slightly clockwise from the DC load line.

According to the red DC load line, which approximates the actual AC load line, the grid voltage can swing positive by 1.2V from the DC operating point, making input headroom equal to 1.2V peak (-1.4dBV). If we assume a first stage gain of 20dB, the guitar signal at the input jack needed to overdrive the second stage is is -21.4dBV (120mV peak), which can be achieved by hot pickeups.

According to the Preamp Gain and Output Impedance calculator, the unloaded gain and output impedance are 36dB and 38kΩ, respectively.

Because of the light AC load of the next stage, the loaded gain is approximately the same as the unloaded gain.

According to the AC load line, maximum peak-to-peak plate voltage swing is from 76V to 198V. The total swing is split between the two outputs, but it far exceeds the 20V peak input signal needed to drive the power amp to full power. The power amp is therefore the first stage to break into overdrive, while the phase inverter runs clean. The inverter has approximately unity voltage gain. 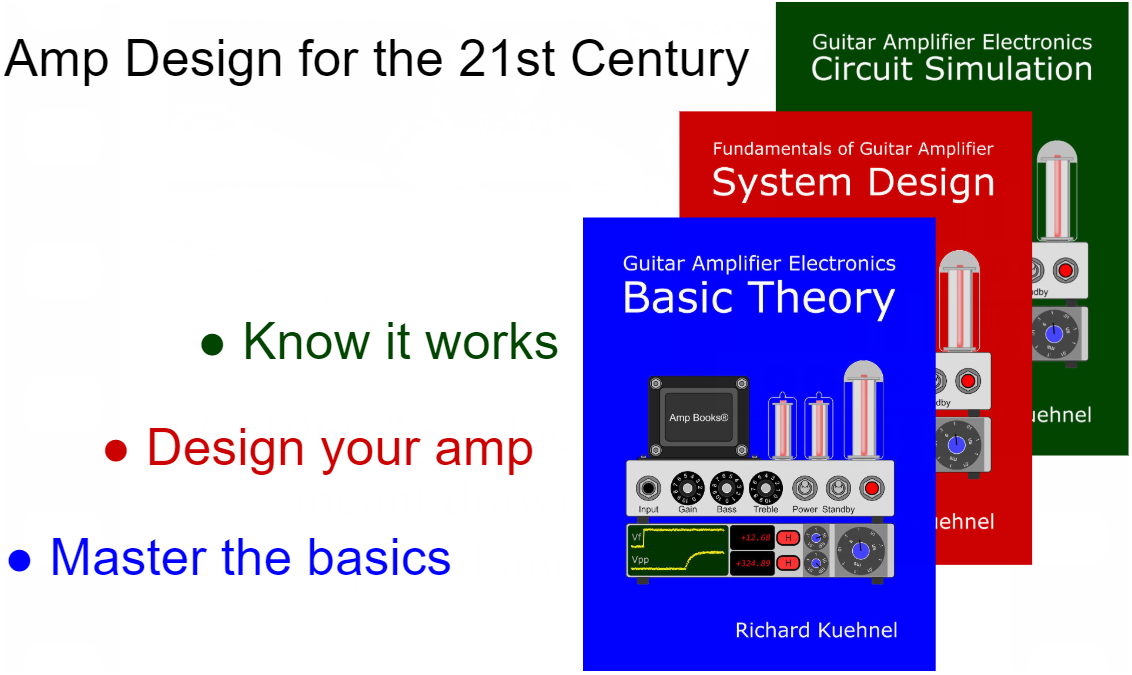 Here is the power amp.

This translates to 40mA per tube. The transfer curves for the screen current show about 3mA for an imagined 300V screen curve (red) and a -20V grid.

The plate current is 37mA per tube.

Plate dissipation is the product of plate voltage and plate current:

This is slightly above the maximum 12W rating of a 6V6, which is rare for Class AB. This is a hotly biased amp!

Here are 6V6 plate characteristic curves for a 0V grid.

The green curve is an eyeball estimate for a 300V screen. The red AC load line represents 2kΩ, which for pure Class B corresponds to 8kΩ plate-to-plate.

According to the load line, the plate voltage swings from 340V to 80V. The net plate current swings between 0mA and 129mA. Output power for a sinewave is in the neighborhood of