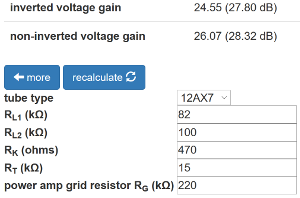 What does this calculator do?

Negative feedback from the output transformer secondary can be introduced by splitting the tail resistor into two resistors and driving their connection by a signal taken from the output transformer. This particular modification is widely used in classic amps. The Long Tailed Pair Feedback calculator computes the amount of feedback needed to create a desired closed-loop gain.

The calculator takes into account the output load of the power amp's grid resistors RG.

To get exactly the same gain in each phase (one positive and the other negative) with identical plate resistors, the tail resistance needs to be infinitely large. (This can be demonstrated, for example, by making the plate resistors equal and setting RT to an unrealistically high value like 1MΩ.) Having a large tail resistance limits the maximum output voltage swing, which is of particular concern for high-power amps. For this reason a smaller tail is often required, which causes the inverted phase to have substantially more amplification than the non-inverted phase. The usual correction is to reduce the size of the inverting plate resistor RL1.